Reigning The Nifty - How Healthy is the 2009 Rally?

A bullish weekly,  monthly, and quarterly closing. Have we reached the top of the wall of worry? Is this climb going to continue? How much strength does this unrelenting rally have? Questions which few can answer. I am going to try to get somewhere close to the answer.

Volume is an important factor as it tells us whether the closing price , on the chart of any period , has been the consensus of a large number of market participants or a lower number of participants. In simple terms , whether the price set was by a large number or smaller number of buyer and sellers. So if volumes are larger when prices rose, we know that more market participants are betting that the price will go higher, and so can conclude that in all probability, prices will move higher. Similarly if volumes rose when prices fell, more market participants are betting that prices will fall further  and we may conclude that prices in all probability may fall further.Taking this premise into account I have analysed price movement during this rally on different time frames. 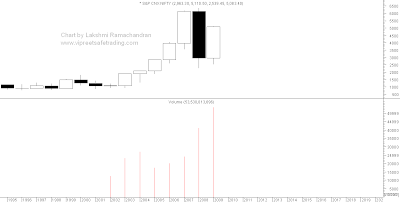 The yearly chart shows that the rise since March 2009 has been on heavier volumes than the fall in 2008.Of course we have three more months to complete, during which time the entire rise could be wiped out or we may rise more. But the point  to be noted is that the rise till now has been supported by heavy volumes which definitely supports the view that India is in demand. 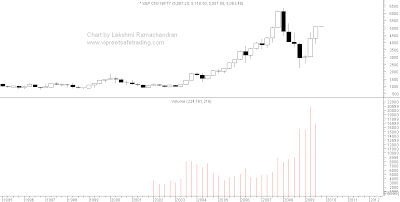 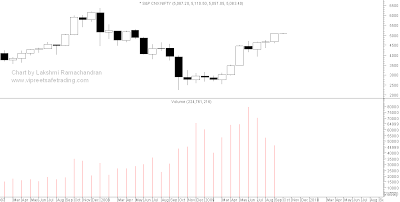 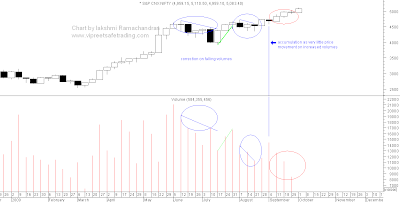 The Weekly Chart Shows that the volumes have fallen during  correction and increased when prices rose. Only the last 3 weeks in September has the rise come on falling volumes.

The higher time frames indicate that the rally has been healthy . The monthly and the weekly suggest a slight waning in buying especially in the month of September. I would thus conclude that  when there is a  correction  use it  to get into the market. Of course I will review when it happens. But as of now the rally is healthy.

Keep up the good work.

THANKS A LOT MAM

As usual the post linked is very good, but my feeling is that as is evident that the volumes are not as encouraging as the price movement in shares and the Nifty bullishness is likely to end soon, unless and until there is some healthy correction to the extent of at least 10- to 12% from the present levels

Please note that I am a novice and these are my feelings, which can go wrong always

Markets are unpredictable ekamber so anyone can go wrong

Your charts and commentry is not only showing the value of Nifty, about you too.

Nice blog you have and simple and effective words you use. Congrats.
This is from an ex banker and capital market enthusiastic.

Thanks everyone. Feels good to get positive feedback

How about making this analysis on the basis of OBV ( Blance of volume )or if possible based on delivery volumes which avoids speculative trading?

madhavan
I dont have historical data in chart form for delivery volumes. If you do please let me know

Very Nice Madam, especially your heart's desire - "I had found my calling" .

I too am a big Nifty fan. You may like to visit my blog, which is :

i also have a group on LinkedIn.com by the name Nifty-NSE-India. I give monthly nifty predictions there - all free.

will surely visit your blog ketan