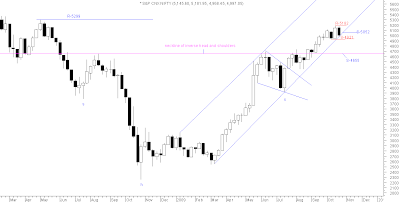 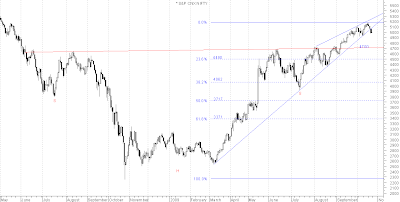 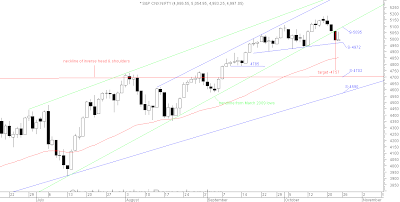 We have an inverted hammer on the daily charts. Or is it a shooting star ?Also an "inside day"


This will be debatable till we see tomorrow's action. The inside day  pattern gives upward direction above 5064 and downward direction below 4968. We could however also try to queue up evidence to see whether they are favourable to the bears or the bulls.

Market breadth was  negative for the week

Put call ratio which was at 1.50 last week has fallen to 1.29  supporting a further  fall.

Inverse head and shoulders breakout has been maintained for the ninth week . Therefore, the neckline , shown in pink on weekly charts , becomes strong support. The level for this week is at 4655 .


Bearish Price Pattern
The channel break shown in my post for 23rd october , with a target of 4750. You may read the post here, http://vipreetinvestments.blogspot.com/2009/10/reigning-nifty-23rd-october-2009.html

A lot of bearish pointers. But the bullish pointers which are on weekly charts are very significant.  The trend thus is still UP. The fall of the last few days may be an ongoing correction in the uptrend till proved otherwise.

So,  I declare my Verdict  as  "Caution. Remain on sidelines " rather than "Bearish" .