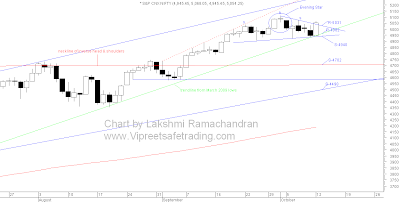 Bullish candle at a  very important support level. The daily oscillators are still  above midline indicating strength. The downtrendline from 5110 has been decisively broken indicating possibility of more upsides  Point of concern is that the volumes were extremely low, hence OBV has to yet give a breakout from the same downtrendline.

In my post on 8th October --view here
http://vipreetinvestments.blogspot.com/2009/10/reigning-nifty-8th-october-2009.html  ,
I had shown a series of failed head and shoulders pattern and mused whether we are in for a similar failure.Technical analysis is based on the fact that "history repeats itself". Lets see whether it repeats here or is a new story going to be written.

The Nifty is still stuck in the range of  5110-4920. I would prefer to remain neutral till the range is broken.