Third day of a lower low and a decisive break of the uptrendline from March lows. The three day fall has been on increasing volumes every day though marginally. The 5 & 10 dema  are bearishly aligned and Nifty is now below the 20 dema. Amongst the daily oscillators the stochastics has reached the oversold zone . Rsi14 is yet above 50 level and Macd is above zero line in sell mode. Some more selling in store.Next strong support is at 4900-4950. 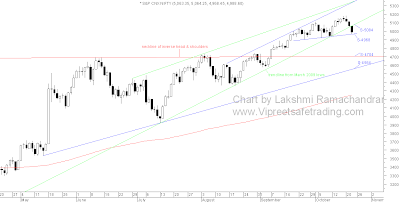 The move from mid August was well channeled and the break gives a target of 4757. 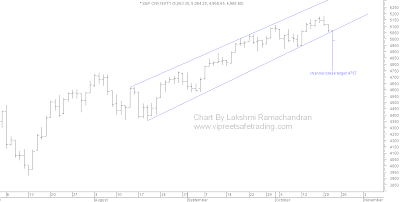 The intaday charts show supports at 4950-4921. The 161.8% retracement of rise from 4921 is at 4760 coinciding with the channel target .All halfhourly oscillators are in oversold region kindling hopes of a bounce. 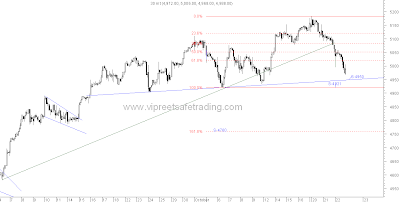 The 200 period ema on half hourly charts , which was a good support since September 2009, has given way and the 5 and 10 ema are in bearish alignment with it.  So "this time it is different" and we may be in for a deeper correction.

The weekly support on the uptrendline from March lows comes at 4983. So be watchful of this level on closing basis.

I have been following your blog for sometime now and frankly you are doing an amazing job educating people like me about technical analysis through your posts. Thanks for the same. Also I saw your Thusday post on 4983 being a support and the low the Nifty made on Friday was at 4983.05. This is seriously amazing stuff. Keep uo the good work and the education series. Thanks.