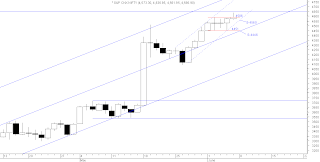 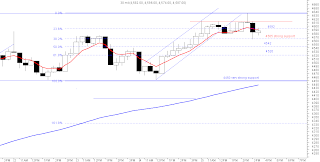 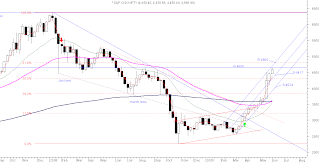 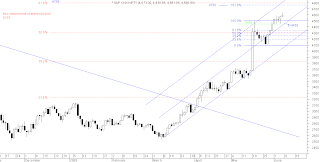 Nifty failed to break out or break down from the Inside day pattern range of 4451-4586. The momentum though was up as the Nifty did trade above 4586 for most part of trade on Friday. Fear of overheated markets led to profit booking, resulting in two way movements and finally forming a shooting star, though a longer upper shadow would have been ideal looking to the wider trading range of past few days.

The weekly as well as the daily oscillators are in the overbought region . First sign of bearishness of the shooting star will be confirmed if we break the recent channel , shown on Daily chart, which has support at 4560. Strong supports are available at 4446-4451, which is also the level where Nifty has taken support since 29th May,2009. Weekly support from the channel is at 4417. Thus we may consider 4400 as trailing stop loss for positional longs.

The half hourly charts show 4565 as important support as it provided support twice on friday. It is also the 38.2% retracemnet level of rise from 4451.

Let's not forget the dominant trend, which is UP. Resistances are at 4650-4800. I would rather buy on a dip than go short at the first signal of weakness. This is a liquidity driven market and India seems to be the favourite flavour of most analysts.