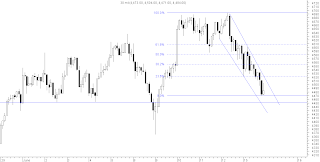 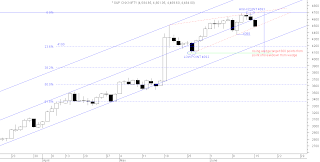 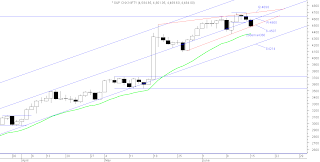 
I had suggested booking out of longs in my post for 12th Friday, 2009 due to several warning signals on daily charts, which was timely. The fall which started on 12th, strengthened beyond expectations. We broke the level of 4551 with a little difficulty , but once it broke the slide was fast.

The Rising wedge has been broken on half hourly charts, but on the daily charts nifty has taken support on the wedge. Support level for tomorrow is at 4507. The line charts though have shown that the wedge has been violated. The RSI 14 has broken the low made on 9th June. As momentum action precedes price action we may expect 4507 to break tomorrow. Let us see whether the low of 9th June at 4365 holds or gives way.

Very minor positive divergences are seen on half hourly charts. We may get a minor bounce before continuing the correction.The fall has been sharp so we may get either a bounce or sideways movement after hitting 4450 levels.