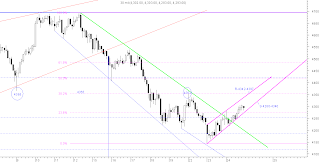 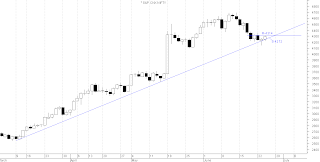 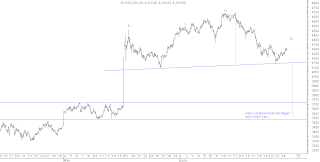 
I wrote yesterday,
"Is the red channel indicating a U turn? The nifty needs to close above 4223 tomorrow for that." Well we closed above that but not with a thunder. So is the U turn for real? Well we dont have enough evidence as yet.

Daily Charts
The Nifty has broken out of the falling channel (shown in yesterday's post) giving an immediate target of 4490 .

Intra Day Charts
The pink channel supports and resistances are marked. Levels of 4352-4365 offer resistance , which I have already mentioned on Daily charts. So looks like we may find it difficult to cross this level.
I have spotted a potential head and shoulders bearish pattern with the neckline at 4115. break would give a 600 point move down to 3550. Invalidation point is a move above the head at 4693.

Conclusion
We may have a upmove in the short term. Strength of the move will give us evidence whether it is a dead cat bounce or a resumption of the uptrend. Till then trade long with stop loss at 4143 and trade cautiously.