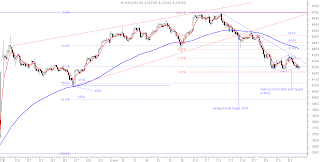 Today was a down day which stayed down till the end of trade conveying the selling will not stop soon. The half hourly chart shows a diamond formation .
The diamond pattern is basically a complex head-and-shoulders top with a V-shaped neckline. It is not a common pattern. It rarely occurs at bottoms. That is to say, it is a very bearish pattern. The target of this pattern is calculated by measuring the distance between the high and low of the pattern. This gives us a 145 point move (4352-4207). The target would be 4110 which coincides with 4116, the 50% retracement level of rise from 3534 to 4693 marked on the chart.

The Daily charts show a bearish engulfing candle though not a very huge one. The oscillators are weak and moving down in sell mode. The stochastic though has turned up from extreme oversold level and about to give a crossover with its signal line.

The low of 4207 was however held.Below this we have strong support of 4092 , the level till which nifty corrected after the huge rise after election result day. The Bull in me says we should find support at these levels.