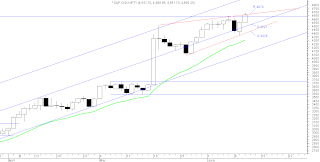 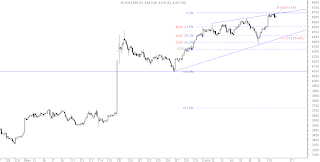 I had pointed out 4656 as resistance at the upper trendline of the rising wedge. Though the Nifty traded above this line for a good part of the day, close was just below it.

For tomorrow resistance of the rising wedge is at 4670 and support at 4428. On previous occasions during this rally bearish patterns have been ignored.The momentum seems to say the same pattern may be followed this time too and we may hit the target of 4758 mentioned yesterday.Let me also remind you'll of the 4800 target (4924 on line charts) which I have been mentioning since April, 2009.

In reply to comments about shorting because it closed exactly at resistance point, my answer is NO. Momentum and trend is Up so shorting is dangerous. Prudence would be to keep trailing stop loss at 4428. If broken we may see 4092 levels tested again. Fibonacci retracement levels are shown on half hourly charts.

good mng sir ,
ur levels are nice .daily i read & follow ur blog

lakshmi
thanks for putting intraday updates on the forum. it is really useful

madam after 4900 can we thought that the bear market end and market likely to cross new high.
pl.tell that this is a bear market rally or we enter in a bull market

dont worry about "bear" or "bull" market.Ascertain the trend on weekly charts and trade with that trend.This is how I do it. Leave the naming of bear and bull market to the media analysts

madam thanks a lot for your valuable comments i like to follow your trend and try to trade with technical analysis.