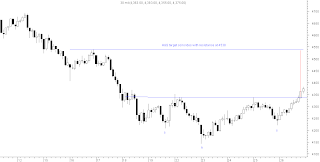 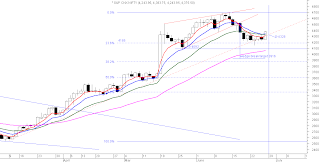 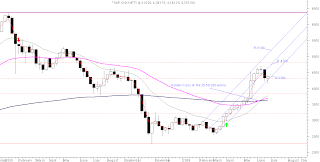 " The stochastics is trending up sharply from oversold levels indicating that prices are no longer closing near the lower range and a reversal is on the way."
The Nifty zoomed 133 points to substantiate my view.

We have just had the biggest fall --fast and furious as someone put it--in this uptrend and this a negative.

We will be watchful of the just begun upmove to gauge whether it is continuing trend or corrective of the recent fall. We will continue this analysis daily so we remain on our toes.
Short term trend is now mildly positive with price above short as well as long term averages on daily charts. Intermediate term is bullish but overbought so one needs to be wary of any sudden change in sentiment which may cause the trend to change. However one needs to trade and the sensible thing to do would be to trade the short term when it is in sync with the intermediate trend which is up. So one can be long for a target of 4538 with a strict stop at 4150-4200.