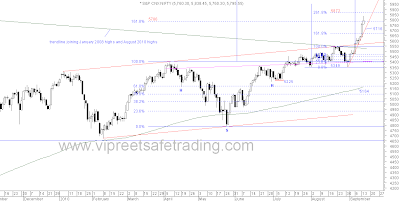 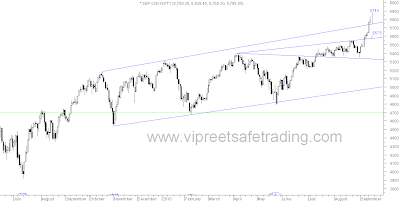 One more resistance , 5786,  crossed and one more high for the rally at 5838 . But nervousness which was not seen at the 5600 and 5700 levels was visible today at the 5800 levels which was crossed easily but found sharp selling from the highs. The fall was small a support was  found  at 5775 , to close  positive by 35 points.

The rise from the 5349 levels of around 500 points has been sharp. To add to the  feeling of nervousness due to the sharp small falls was the breadth which was extremely negative. Volumes were high  with declining volumes exceeding advancing volumes. Daily Oscillators  have reached the overbought zone.

Fantastic graph No.2 today. Wish it had been there earlier!

The first graph's red trendline is the same as the one in the second with support at 5575. Since wanted to get some levels which could act as resistance drew the trendline joining the tops of October 2009 and Jan 2010. So besides giving a clearer look there isn't much which is new in it.