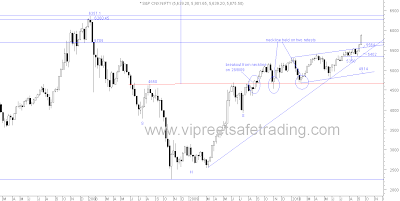 Weekly Charts are very bullish with a huge bullish candle giving credibility to last week's breakout.The resistance of 5705 was also broken easily opening up possibilities of attempting a move to 6260-6357.Negative divergences are intact but the oscillators have moved above the previous few peaks made since August 2009 showing momentum has picked up.Volumes were good but breadth disappointed.However breadth improved on the last day of the week.Weekly support at 5700 -5564.
Daily Chart 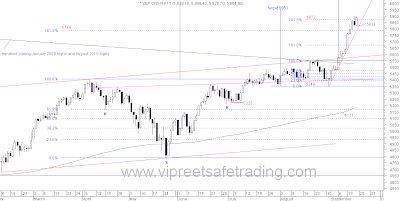 Today was an Inside Day and inspite of the bullish candle of 56 points, the day will have to be termed as indecisive as yesterday's range could not be broken.However the fact that the bullishness came after some sharp selling on Thursday  makes the move positive. Breadth too was positive today after remaining negative for most of the week.Volumes too were good . A move breaking the Inside day range of 5815-5901 could catapult Nifty to 6000 or pull it back to 5700.All oscillators except the macd are in the overbought zone.
Supports are at  5860-5835-5765       Resistance is at 5900-5955-6000.