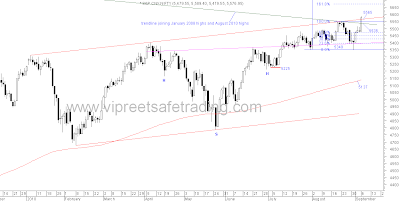 Suspecting the last two days action as consolidation proved right with the Nifty rising  a 110 points .Volumes were good and breadth positive.Such huge gains have been seen after a long while. Had got used to the tiny ranges in which Nifty has been trading for such a long time.

The Nifty brokeout from the flag formed during consolidation. This has also led to a breakout from the range of 5350-5550 and from the red  channel's upper trendline. Historically,  there is  only a minor resistance at  6250 between today's high and  the all time highs of  6357. So we could look to fibonacci resistances which is at  5673 (161.8%)  and 5873 (261.8%)  of the fall from 5550 to 5350. Also the resistance from the expanding triangle was hit exactly at 5589 and Nifty has closed just below it. A breakout from this triangle is all that is needed now to catapult Nifty to higher targets. Resistance for tomorrow from this triangle is at  5590-5594.