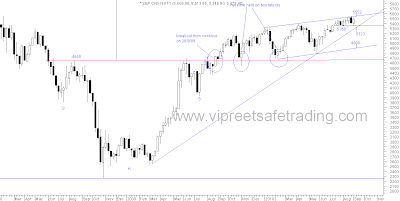 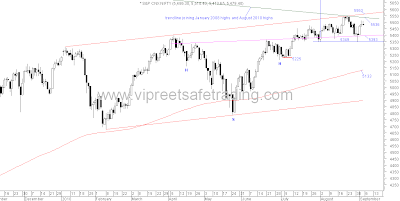 The weekly candle made a lower high lower low changing the bias to down.Volumes were low. Breadth was marginally positive .
Last week I said  " if Nifty is not able to take out the high of 5500 , an immediate fall of 500 to 600 points could be expected."  But the support of 5350 held once again making it the eighth  week to hold above it. This has for the time being stalled the fall  and  raised hopes of the possibility of more upsides.The bullish hammer with bullish candle for a follow up on daily charts shows strong  buying  support   at  5350 levels.On weekly charts oscillators are holding above the 50 mark and macd is still in buy mode.

A trading range of 5350-5550 has been formed and only a break beyond these points could give Nifty direction  and a move of 200 points on the side of the break.
The daily candle has formed an Inside day once again showing indecision.Oscillators too show indecisiveness as they move up and down around the 50 mark on  daily charts. The last two days action shows strong resistance at the 5510 levels but good support at  5470. This looks like a consolidation after the sharp rebound from 5350 as only 23.6%  fibo level has been touched  . Look for immediate direction from the Inside day range  above 5514 and below 5471 .