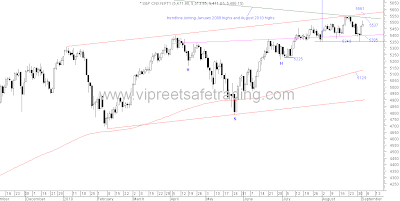 Today's session was not as satisfying to the bulls as compared to yesterday's. The  Resistance of 5513 mentioned yesterday was hit in opening trade and  consolidated within the small range of 40 points.The candle formed is bearish with a long upper shadow showing  nervousness at higher levels.However the higher high and higher low sequence was maintained .Volumes were average and breadth positive.

Bullishness can be seen only on a move and close above 5537-5550. Nifty needs to sustain above 5400 to avoid weakness as  the 5350 support has been tested a lot of times and  holding the same again may prove difficult. Thus a  break of  5400  may make bulls nervous enough to give up fort.