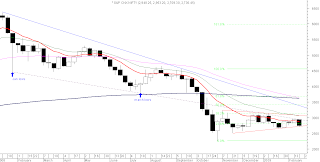 Weekly Charts
The overall picture on the weekly charts is much the same as last week . The triangle has still not been broken either way nor has the range of 2500 to 3250 . The lower trendline has been tested for the third time, and resistance has been hit at the trendline joining Jan ‘09 lows and March’09 lows for the third time too making them important resistance and supports. The resistance and support of the two trendlines just discussed for the coming week are at 2925 and 2743 respectively.
Above 2925 the 20wema resistance is at 3059 and the resistance offered by the upper trendline of the triangle is at 3063. Below 2743 nifty is supported by 2661-2570-2500 all previous lows. Break of 2500 could attract short selling till 2250 levels. So watchout for those levels !
Posted by Lakshmi Ramachandran at Sunday, February 22, 2009