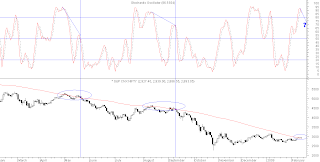 84sma on the daily charts has acted as strong resistance . the circled tops show false breakouts above the moving average. this time too the break seems to be false as after two days of close above the 84sma , the nifty has closed below it today. last two times after the first breakout a fall and then a rally not surpassing the previous top. so shorts could be held with a stop just above the recent high at 2957.40.