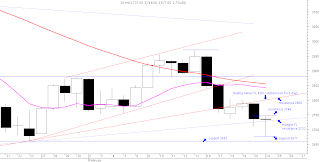 The nifty almost touched our levels of 2661 mentioned yesterday. The low 2677 made today should act as good support as a hammer , though not a perfect one has been formed. The positive divergences mentioned yesterday helped a good recovery. The daily stochastics has given a buy in the oversold region. So upsides are possible. One could go long with a strict stop loss at 2661 for upsides to resistance points as shown in the chart 2746-2789-2808. If gets resisted at any of these points then sell with a stop above the level to which it rallied. Trade light as the expiry is near.

I think that the trading range is now going to be beteen 2660 and 2720 for a couple of days. The sops announced by the government was not able to lift Nifty beyond 2750 a crucial psychological level. I still stick to the same position taken by me yesterday. Go long safely at 2660 and an adventurous short at 2750 levels for intra day.
Murali

yes those two levels are key to further trading