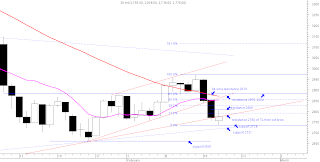 As predicted the nifty rallied, though weakly. I t could just about retrace 23.6% of the fall from 2970 and then continued the downtrend.and finally closed below the uptrendline from october lows for the second day in succession. However it has not yet broken down from the equilateral triangle which offers support at 2721 for tomorrow.
Further highs will be seen if trades above 2806 and will face stiff resistance at 2870-2880 , an area of multiple resistances as shown in the daily charts. 2880 is also the 61.8% retracement of fall from 2970-2736.
If trades below 2736 then chances of break from the traingle becomes more probable taking support at 2661-2665 being january lows and the target of upward channel break as discussed in earlier posts.
Todays trade was on the weak side technically as even the 23.6% level was not crossed. Thus bias remains negative and one may look for shorting oppurtunities more than buying ones.
Posted by Lakshmi Ramachandran at Wednesday, February 18, 2009

wow!! amazing web site...keep the good work up lakshmi...i am sure u will help add quite a few bucks in our pockets!!:)