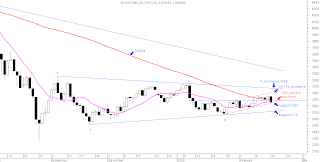 Daily -- I had mentioned in my post on 12th february about the nifty not able to hold above the 84 sma and likwise it failed this time too , closing well below the moving average.(refer to chart posted on 12th) . On the other two occasions, after an initial retracement from the 84sma, nifty has rallied once again but has been unable to scale the high from which it retraced. We may expect a similar short upmove since it has also found support exactly on the upward channel of the last few days. We remain short with a stop loss of the recent high of 2970 .supports and resistance on daily charts can be seen on the chart.
Posted by Lakshmi Ramachandran at Monday, February 16, 2009