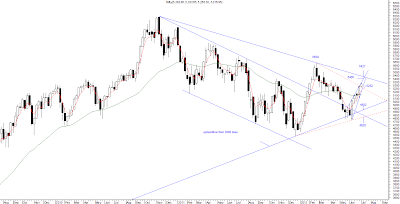 A slight wane in the upward momentum depicted by the small bodied white candle.A higher high and higher low made never the less.The downtrendline from November 2010 top passing through 5630 has resistance now at 5427.Drew trendlines for the uptrend from 4770 lows ( to form the rising wedge I have been showing on daily and half hourly charts ) which  has resistance and support at 5405-5310.

Oscillators are showing strength.The stochastics has reached overbought zone and may trigger a pullback. 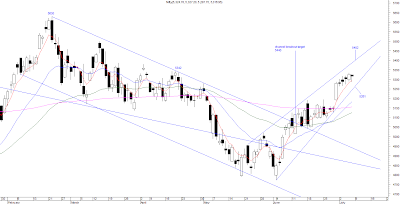 A bearish harami was formed today. A harami is a black candle inside the previous day's white candle occuring when the stock is in an uptrend. This essentially tells us that the buying has stopped. Confirmation is seeing the next day open weaker.With the stochastics in overbought region and the Rsi14 having turned down from the overbought region the possibility of a pullback increases.
Holding the support line at 5261 will be bullish.A break though should find support at the 5149-5191 gap shown below. 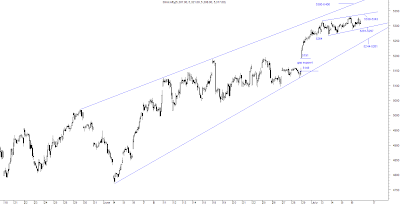