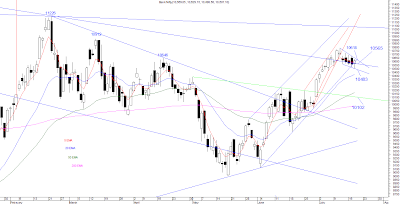 Maintained above the downtrendline joining November 2010 highs with 11226.Taken support on support line of the pennant formed.The continuation pattern will be confirmed on a breakout from it's resistance line at 10618.
The daily candle pattern formed is a bullish harami. The bullish harami occurs in a downtrend and comprises of a  black  candlestick  engulfing a small  white candlestick, and is a sign of a reversal of the downward trend.Watch out for a break above the pennant to confirm the reversal of the very short term downmove.