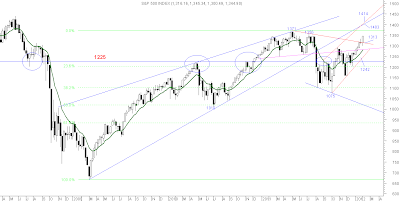 Bullish breakout from the downtrendline from 1371 after a doji signalling strength.However an outside day pattern was formed  conveying this may be the last gush of pigs getting into the market ready to get slaughtered by the wise smart bulls readying to turn bears. If it occurs after a big move, which is the case, it is often taken as a signal that momentum is waning for that move.The larger the range and higher the volume, the more significant is the pattern.Volumes on the S&P was above average and range too was  larger than usual. With the oscillators in overbought position one needs to be careful on longs 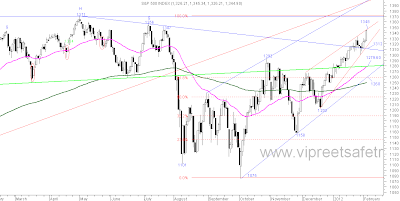 Bullish candle on average volumes.The breakout form the downtrendline drawn from 1371 is now decisive with a classic breakout from the trendline,retest without breaking below it and then continuing bullishing above it crossing the highs made on the breakout.A rising wedge is formed again indicating a correction long due may ensue.

Use trailing stops or convert your longs to calls or buy puts as a hedge to ride the liquidity led rally which could achieve targets of 1492-1556 if the top of 1371 is taken out successfully as shown in the chart below. 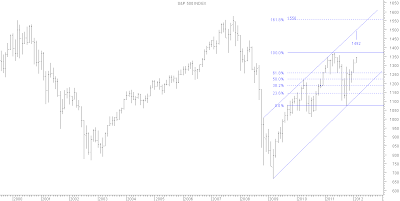