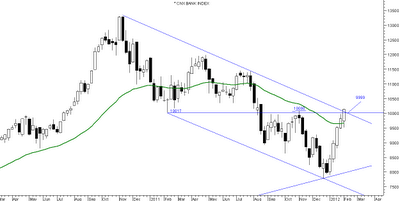 Bullish Indications: Breakout from the previous peak of 10080,downtrending channel and the downtrendline from November 2010 highs in the fifth consecutive bullish week. The volumes were encouraging.The 61.8% retracement level of fall from 11451(July 2011 high) was also scaled opening chances of testing the high.Oscillators are showing strength and crossed their July 2011 peaks.The medium term wemas 50,100 and 200 are bullishly aligned.
Bearish Indications :Stochastics in overbought region at a level from where previous corrections have been triggered.20 and 50 dema bearishly aligned yet.Fibonacci  resistance and prior support at 10340-10365 should prove strong resistance shown in the chart below. 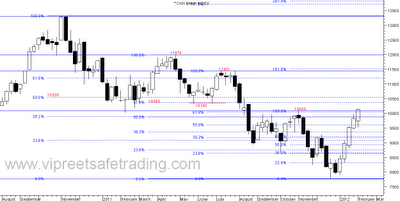 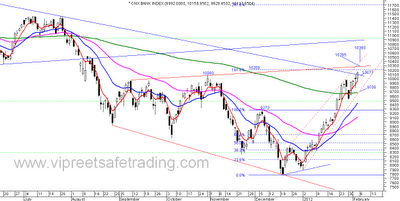 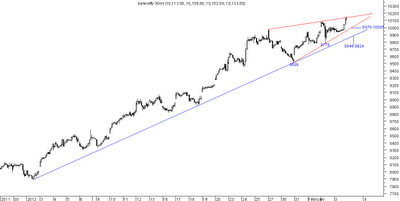 Conclusion : The charts are starting to look bullish but with the overbought oscillators on daily charts and
strong resistance at the 10285-10390 area one needs to be careful with longs.Break of the support line of the rising wedge will lead to a test of 9500.
Stop loss at 9705 on longs.Other supports marked on the half hourly chart.