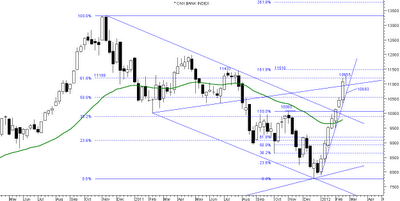 Bullish Indications : Huge bullish candle for the week.Macd has moved above the zero line and Rsi14 is showing strength having moved above the December 2010 peak.Stochastics too has moved up again in the overbought region.
Bearish Indications : Stochastics in overbought region so a correction may be due anytime.Resisted at 61.8% retracement level of entire fall from 13304 to 7766. 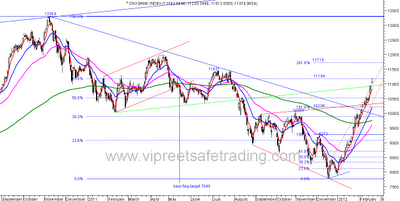 Bullish Indications : A gap up opening in keeping with the trend.Rsi14 and Macd showing strength.

Bearish Indications : Shooting star candle formed which is a bearish reversal pattern.The fact that it gapped up makes it all the more bearish.Appearance at key resistance - 61.8% retracement level - adds to the bearishness.Confirmation is however required on the next candle.Stochastics and Rsi14 in extreme overbought region making the Bank Nifty vulnerable to a correction. 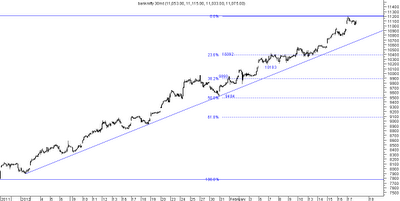 Conclusion : Trend is up but the Bank Nifty is overbought and a correction overdue.A shooting star at key resistance indicates the probability of a correction is high.Continue longs with a stop loss.Only a fall below 10392 will accelerate the fall and only a fall below 9484 will pose a threat to the uptrend.