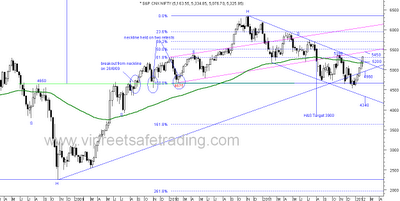 Bullish Indications: The 4650 levels held well which I have been mentioning as crucial to the long term bullishness.The 40 wema has now been decisively crossed after sustaing above it for the second week in a row.The downtrendline and channel since November 2010 has been crossed with a bullish candle on very good volumes.The ocsillators have crossed their peaks made in April 2011 coinciding with Nifty's peak of 5944.Oscillators showing strength.
Bearish Indications : The crucial dow signal of crossing the previous peak at 5399 is still pending.Stochastics has reached the overbought region from where corrections have started within a few weeks. 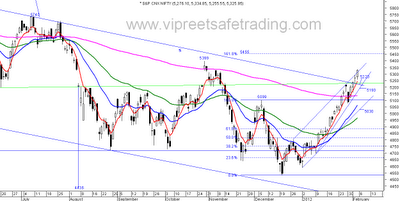 Bullish Indications : The Nifty has crossed above the downtrendline from November 2010 and the 200 dema on good volumes. The 61.8% retracement level to 5740 at 5282 has also been scaled after a brief struggle.This opens the possibility of the Nifty targeting 5740.The possibility of a bearish divergence on the stochastics has been brushed away with the stochastics making a new high and the Macd is in a buy.
Bearish Indications : Markets overbought and vulnerable to a correction.The previous peak of 5399 yet to be scaled decisively.The 20 and 50 dema yet bearishly aligned with the 200 dema.Fibonacci cluster at 5400-5455 as shown in the daily chart and on half hourly charts below making it strong resistance to overcome. 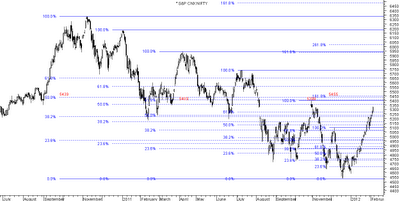 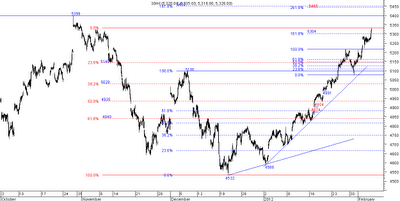 Conclusion : The charts have started turning bullish and it is difficult looking for bearish indications.However a pullback is overdue  and strong resistance at 5400-5455 may be the excuse for the correction to start.Retracement levels marked on half hourly chart.Break down from rising wedge,shown below, in red may lead to test of 5076 low.Stops an be kept at 5226-5176-5076 as per your risk appetite. 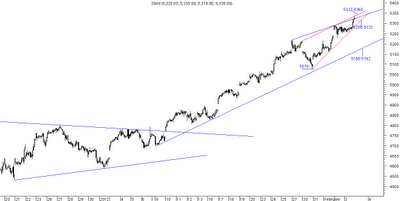