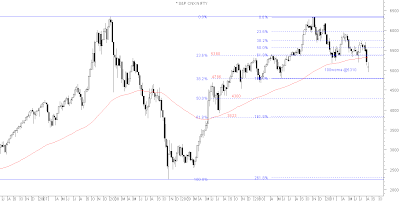 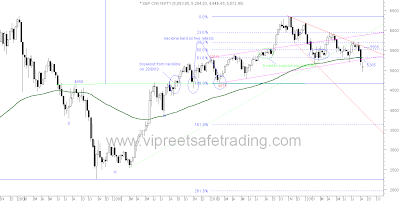 With the extreme weakness existing one could safely assume that the bears will have an upper hand till the resistance of 5265-5310  and then 5565 is conquered.The next fibo confluence is at 4786.The bottom for 2010 was 4675 and the green neckline at 4650 of the inverted head and shoulder pattern which I have been showing since mid 2009 forms a strong support area.The weekly oscillators too are approaching the oversold zone.So watch out for the 4650-4786 area where there is a high probability for Nifty to reverse. 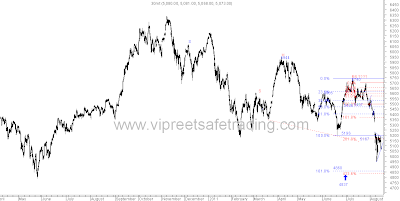 The half hourly chart reiterates the area of 4860-4837 as strong fibo support.The latest action after the gap down on 5th August , has formed a pennant which is a continuation pattern. The weekly candle , a high wave doji, shows indecision and could be signalling a change in direction.So wait for a breakout from the pennant,which is  a symmetrical triangle, and trade in that direction.