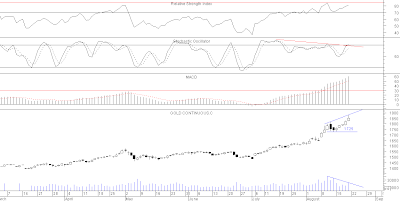 Gold has had as steep a rise as the fall equities have had. Reverse action in both should occur sooner than later. The stochastics already shows negative divergence.Even a small reaction or sideways movement would set the RSI (which has not made a new high in line with the price) in negative divergence.  The red line in the Macd window shows the maximum levels reached till the recent steep rise.Macd thus has reached extreme overbought levels signalling a pullback is due.Volumes have been falling lately, as marked on the chart, showing lower participation on rises.

Booking partial profits is prudent. The greedy can keep a tight stop at 1725 till the further target of 1950 is achieved.