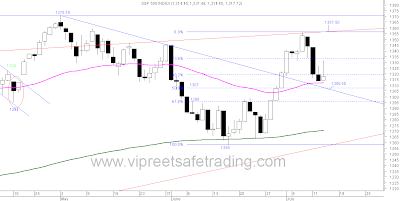 Daily stochastics is in oversold region and the weekly stochastics still has room for some rise. The expanding triangle,( shown in my post of 11th July which you may read here - http://vipreetinvestments.blogspot.com/2011/07/s-500-update-11th-july-2011.html ), which normally has three peaks , has yet to complete one peak.Thus the vote is for the inverted hammer.