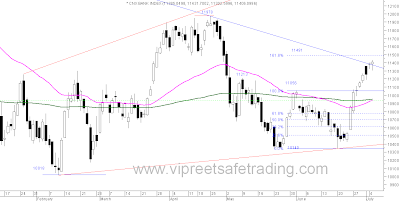 An outside day pattern occured. Today's candle  was a doji . Doji's are candles indicating indecisivness thus pointing o the fact that the existing trend may be coming to an end.Outside days too are one day reversal patterns.The stochastics too is in a sell in the overbought region.

Today's candle though showed some positives too. The close was in the positive showing bulls won the session though very marginally forming the doji.The close  broke and closed above the downtrendline from 13304.

The Bank Nifty has crossed 11056 and is on the way to target 11772.However till 11978 is crossed the bears could take the upper hand at any point of time.