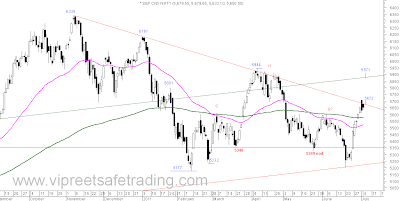 An Inside day occured resisting at the downtrendline from 6338. Indecision indicating bulls getting jittery.  An inside day found near the end of a prolonged uptrend may suggest that the rally is getting exhausted and is likely to reverse. Though the uptrend has not been prolonged it is eight days old. The stochastics has given a sell with it's signal line in the overbought region.This strengthens the possibility of a reversal. 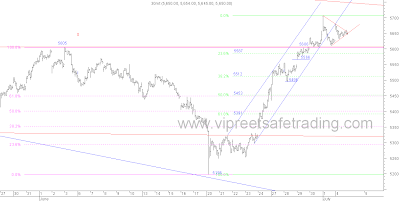 Half hourly charts show the Inside pattern in a coil which is a pennant. Pennants are short-term continuation patterns that mark a small consolidation before the previous move resumes. These patterns are usually preceded by a sharp advance or decline with heavy volume,which has been the case with the Nifty. The mark a mid-point of the move when volumes are low, which has been the case with the Nifty since the last two days.The breakout therefore should be on the upside but to give validity to the pattern should be on high volumes.The target would be the same distance as travelled before the pattern formation which is 450 points.

Oops ! Two diverse views. Solution : Trade in the direction of breakout of the Inside day pattern's high -5706  or low-5610