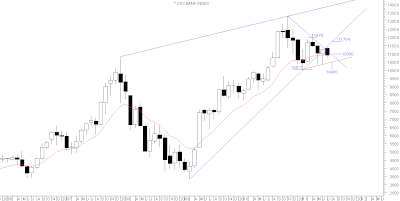 The month's trading remained below the uptrendline from March 2009 lows.The close was below the
12 month ema indicating  bearishness.This average is a fair indicator of the ongoing  trend as is visible from the chart. The downtrendline from 13304 highs remained stiff resistance. 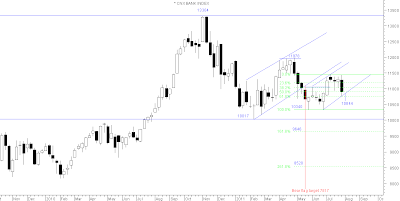 As mentioned since the past two weeks ( read here http://vipreetinvestments.blogspot.com/2011/07/reigning-bank-nifty-weekly-update-23rd.html ) appearance of bearish continuation patterns did the Bank Nifty in.The close was the lowest of the past 4 weeks with a huge bearish candle on increased volumes..

Support taken exactly at the 61.8% retracement level of rise from 10340 to 11451. If stays above 10844 some pullback could be expected to correct the oversold status. 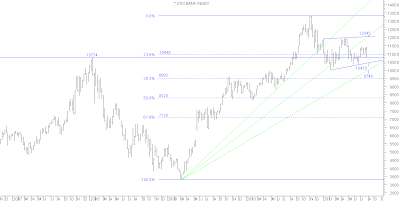 The above chart shows consolidation in the range around the previous peak of 10774 made in 2008. Holding 10450, which is support on trendline joining lows since correction from 13304, will see the Bank Nifty continue with the consolidation.Else bears may lead the way to lower levels as marked on the charts.