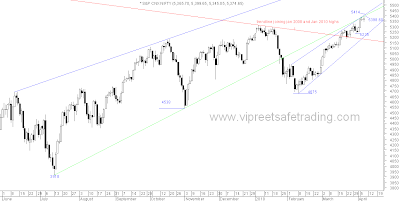 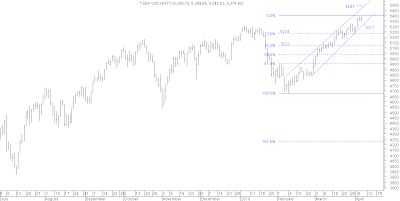 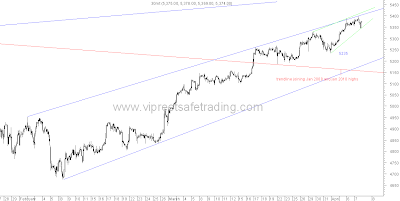 Second successive doji  which has formed an outside day  (a higher high  and a lower low than the previous day).  If it occurs after a market has had a big move, it is often taken as a signal that momentum is waning for that move.This applies to the Nifty as the uptrend is 7 weeks old.

Oscillators on daily charts are overbought and showing negative divergence. Intraday oscillators are in neutral zone.Volumes were marginally higher than average and breadth positive.The upper trendline of the channel shown on half hourly charts has proved resistance since the last two trading sessions increasing the possibility of Nifty correcting to touch the lower trendline.Refer daily chart II for levels where I have redrawn the channel  . This makes 5317 very important support. Resistance on the way up is at 5414-5487.


Trend is up but one may keep a stop loss of 5317 on existing longs to protect profits.

Still Daily OBV in upward? and Weekly flat or up?

Close above 5317 is +ve for upward momentum? shall we hold long for shorttterm?