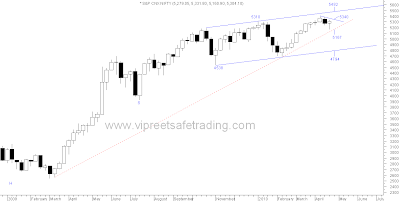 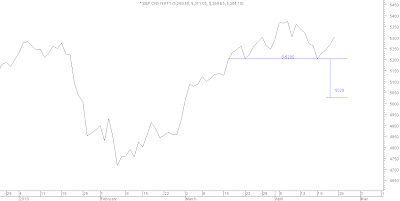 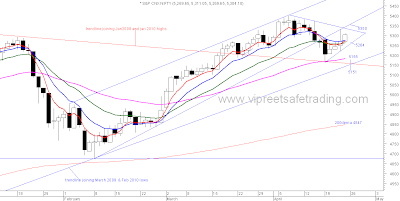 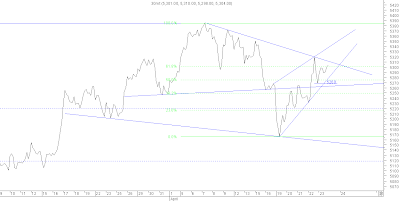 The inability to reach the upper trendline of the channel shown on weekly charts is called "return failure" and is considered bearish. The failure to reach a channel line provides warning that the current trend is losing strength. If, on the other hand, nifty breaks out of the channel line, it is a sign the current trend is accelerating.
Thus , till the earlier high of 5400 or the upper trendline of the channel is crossed, Nifty could move lower. However ,  the Nifty could continue to move up till the low of 5160 is held.In short, expect whipsaws till the range is broken.

ur analysis is simply great tanks a lot mam.

It's really very happy to c your updation on Saturday itself :)

Lakshmi ji, ref: weekly chart - (1) from the low of march 09 from where this bull trend is going on - you can find every time whenever there is a correction, nifty is finding support at higher levels (means: higher lows) -- this has been continuously going on since last four corrections. Same thing is true with reliance also. So my understanding is RIL would early warning signal if nifty is going to change the trend..

(2) One of my friend was trading on swing set-up based on ADX on weekly charts.. saying "hook is ready" to initiate fresh position on nifty and closes it at the bottom.

Now my request is: Would it be possible for you to co-relate these (above two points) at the end of week along with your nifty views. Wouldn't it give more accuracy?? just a wishful thinking.

sweety, every analyst has a different style/set of indicators.markets are dynamic so whatever method/indicators u use u will always be wrong sometimes.Important thing is dicipline in your way of analysing and acting on the same. so incorporating those two points need not make it accurate, though it may substantiate, though only at times as Reliance may start having it's own bull or bear run. Also too many indicators leads to paralysing your analysis.