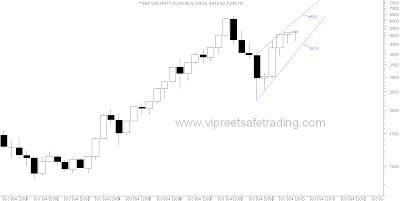 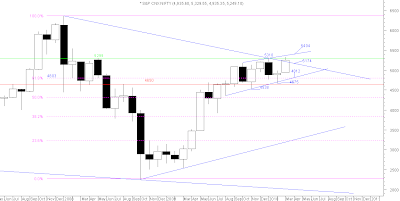 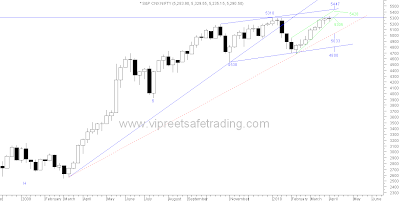 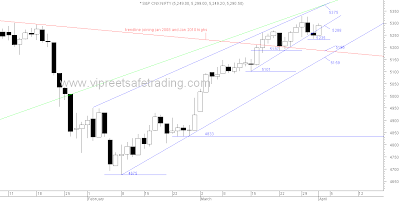 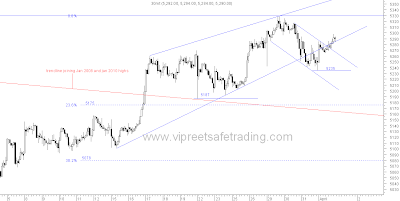 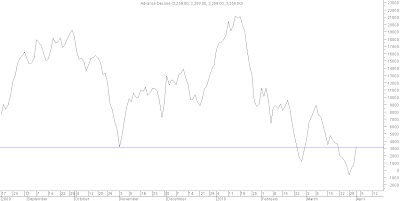 Half hourly stochastic oscillator has reached oversold zone. Rsi 14  has reached levels where it has taken support at levels maintained since 15th March. Nifty has bounced back twice  from these levels . Will it do so a thrid time? The fall has formed a falling wedge which is a bullish formation. Watch for support on the lower trendline of the wedge as this may lead to a breakout from the wedge.

Nifty managed to claw back 40 points as anticipated on very good breadth, but, on low volumes.
Half hourly charts have given a breakout from the falling wedge and the falling channel too which appeared after redrawing the upper trendline. Oscillators too have started showing strength once again.A test of the recent top of  5330 is possible due to improving technicals in the very short term. Breadth improved considerably on the last trading day.Crossing 5330 could lead to further upside, levels marked on charts.

Daily , weekly and monthly oscillators continue to  show  negative divergence. Quarterly charts show stochastics having reached overbought levels. Volumes are falling on all time frames. Breadth too has been on the decline. All this points to remaining cautious on longs.

Excellent analysis as usual Ms. Lakshmi. Hats off to you!!

Hi,
I check your blog once everyday, very crisp analysis.

Daily MACD is about to give sell ? (Run outta steam, it seems)

I second Sujatha, Anoop and Venky.

Thanks for posting the AD Line. The way mid/small caps are zooming it looks an AD line peak in this series or May series is quite possible.

thanks girish and navneet.