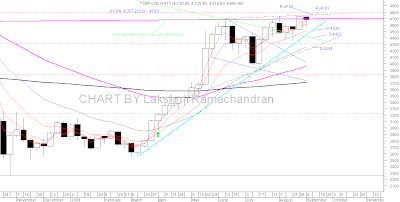 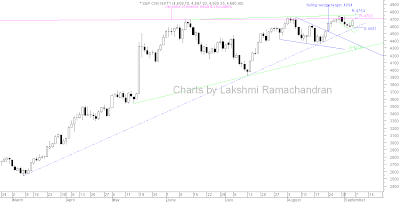 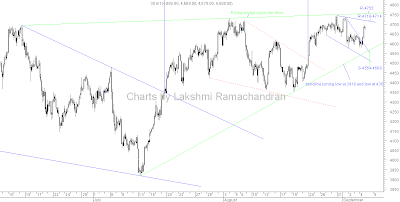 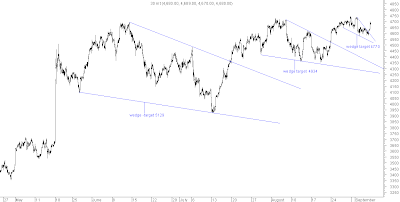 Series of falling wedges on half hourly charts


Thursday's candle was an inverted hammer and Friday's bullish candle was a confirmation to it's bullishness. This clearly signals that we may see more upside. The strong resistance of 4650 has also been scaled easily and the close of Friday at 4680 was just above the 61.8% retracement level of the fall from 4744 to 4576.
However doing the  health check of the Nifty is very necesssary.

Momentum
Momentum is not all that rosy and the stance according to this would be neutral.

Moving averages on all time frames are bullishly aligned.
Sentiment Indicators
Bearish Pattern
Bullish Pattern
Nifty is labouring towards highs as health does not permit. As per articles I have read on Price to Equity ratio the Nifty is fully valued. Any further upside thus, should not be sustainable. However , technically,  the recent action shows more upside targets for the Nifty.  Scaling of the rally high of 4744 is necessary though.

Though momentum is playing hide and seek with Nifty , price tells us that the Nifty is up till the recent low of 4576 holds.I would prefer to hold  hedged  longs with a stop loss of 4576.