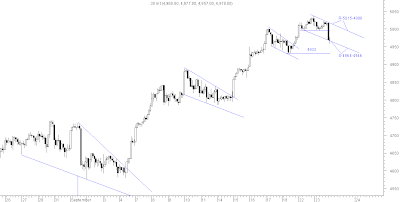 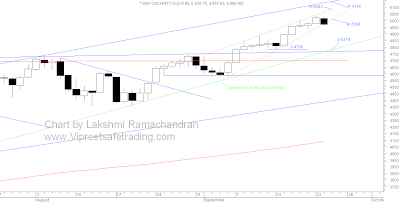 Sorry for the delay. Had some problems uploading.


A lower top and lower bottom.day.The candle made today is a bearish engulfing pattern .This is clearly visible on the Sensex chart. The uptrendline from 4th September has been violated which has also resulted in  breaking down from the rising wedge shown in red dashed line on daily charts. The target is highest point - lowest point on the wedge, which works out to 5036-4580=456 points. Breakout level  4980 - 455 = 4535.

On half hourly charts, the 5,10 & 20 period ema  are in bearish alignment. The stochastics has reached oversold levels and the RSI 14 and  Roc12 are  fast reaching oversold zone. The rsi14 and roc12 have broken below their respective levels made on 14th September. The respective level for the Nifty is at 4787. We could anticipate this level to be broken as momentum preceeds price.

On daily charts oscillators have just about turned down from overbought region. Soif the fall has begun then there is a lot of room for more.

Hope readers heeded to the cautionary notcie which I have been flashing for sometime now and in red yesterday. Aggressive shorts must keep a strict stop loss of the highs made at 5036 till the uptrendline from March 2009 lows has been broken. The trend is still UP so bears beware of the bulls and bulls beware the bears seem to be getting ready to hug you'll.