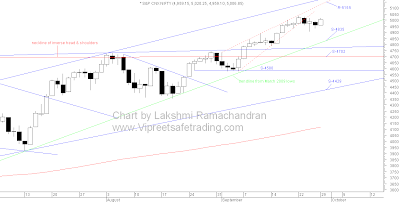 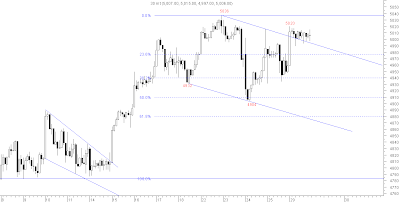 An up day with futile attempts to cross the previous high of 5036. The break of the rising wedge shown in red on daily charts has led to a sideways move . The daily oscillators remain much the same due to the sideways move.

The intraday moving avergaes are all once again bullishly aligned. The half hourly stochastics has once again reached overbought  region. The Nifty gave a breakout above the falling channel shown on half haourly charts but remained sideways with a downward bias.The analysis remains the same. Look for a break below 4904 for further downside and a break above 5036 for further upside.

The trend is up till the trendline from March 2009 lows is not violated. Level for tomorrow is at 4835.
Tomorrow is the monthly closing and staying above 4600, which is a good possibility, bullishness  remains.

The Put Call ration decreased further to 1.22  As mentioned earlier, the decrease in put call ratio is  indicates confidence among market players of the upmove continuing. This is a negative as increase in positive sentiment works as a contrarian indicator, indicating a possible fall. Further, negative divergences on oscillators and very low volumes are cautioning one to be light and keep dicipline while trading.