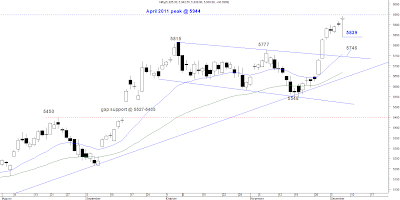 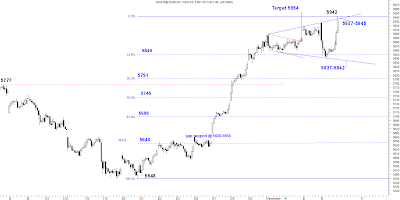 Nifty corrected for a good part of the trading session as had been anticipated but gave a surprise recovery in the last hour and a half falling short of two points from the April 2011 peak of 5944. This gives a sense of bullishness but the patterns on the daily and half hourly chart tell a different story.
Daily candle formed is  a Hanging Man pattern which is a bearish signal indicating that the  uptrend  may   end and may reverse to a downtrend or move sideways.The Hanging Man has a long lower shadow that should be at least twice the length of the Real Body. The upper shadow should be very small or non-existant.The longer the Lower Shadow ,the smaller the Real Body and the Upper Shadow of the Hanging Man the greater the significance of the pattern all of which are conformed by the candle on Nifty.
Half hourly charts show an expanding triangle which is also called a megaphone pattern which is a bearish pattern. This supports the bearish view.
If tomorrow's trade were to open above the real body of the hanging man which is 5930 and closes above this level then the bearish view would be negated.The resistance from the megaphone pattern intraday is at 5937-5945 so Nifty needs to cross and close above 5945 to negate this pattern.If negated then Nifty could move towards a target of 6100-6200.
If fails to negate bearishness then support intraday is at 5837-5842