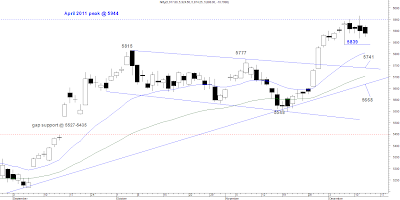 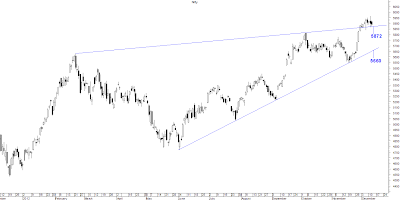 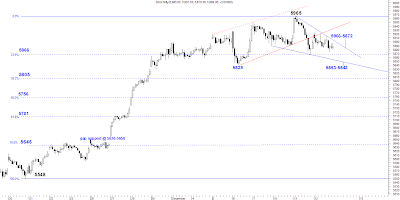 Nifty  made a sideways move within an extremely narrow range of 50 points forming an "Inside Day" pattern.
An Inside Day is a day that has a lower high and higher low than that of the prior day.Simply put, the high and the low of the previous day are not violated. Inference of this is, the market may be catching its breath before another up or down day. It could be indecision between bulls and bears . Or, it may be hesitation by the market players who are wary whether the current trend will continue.

The pattern can become quite powerful when it occurs after a long-lasting trend or at significant resistance and can therefore signal a reversal.This is true in case of the Bank Nifty. Confirmation would be when the low of the pattern which is 5865 is broken decisively and the close is below it.

Negative divergence on the Rsi14 & Macd and the stochastics having given a sell and moved below the  80 levels supports a fall.Low volumes suggest mild profit booking rather than aggressive selling.

The effect of the morning star saw a gap up open which rightly resisted at the support line of the rising wedge shown yesterday.

A falling wedge shown in blue is seen forming on half hourly charts which is a bullish pattern. Breakout from this pattern could see the Nifty resuming it's uptrend.Till the support at 5872 shown on daily chart II is held the upmove could resume. If breaks then could test the rising wedge support line at 5660.

Write to vipreetsafetrading@gmail.com for my Daily Newsletter.