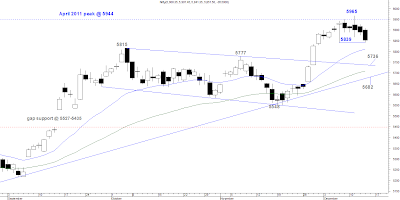 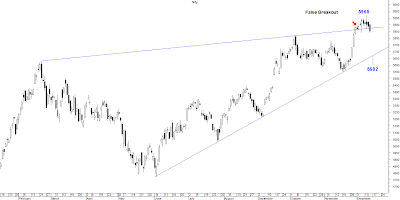 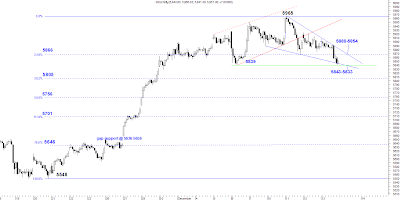 The Inside Day pattern mentioned yetserday broke on the downside indicating the short term is down.The breakout from the resistance line of the rising wedge proved to be a false breakout with the Nifty breaking below it.The possibility of testing the support line of the rising wedge on daily charts is now possible.
Negative divergence on the Rsi14 & Macd and the stochastics having given a sell and moved below the  80 levels supports a fall.
Support at 5839 has still not been breached keeping the hopes of bulls alive.Break will find support at 5815-5805-5777 as marked on the charts.The continuation falling wedge on half hourly charts indicates this fall maybe a consolidation and the Nifty may ultimately breakout on the upside to resume the uptrend.Only a break below the support line of the rising wedge on daily charts  at 5682 will bring the rally from 4770 under threat.Resistance levels intraday are at 5880-5854.Support is at 5843-5833.