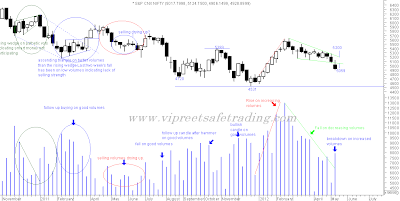 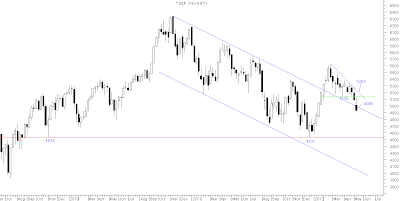 Breakdown on increased volumes.The Nifty is back into the downtrendling channel which it had broken out from giving a bullish call.Now the possibility of heading lower has increased. The neckline at 4531 is now under threat.4985 and 5136 will be the first barriers that need to be crossed for the bulls to make a comeback.
Stochastics is in the oversold zone increasing the possibility of a pullback.Rsi14 shows more place for weakness.It is a sell on rise market now.unless the bulls show their presence by breaking above 5208. 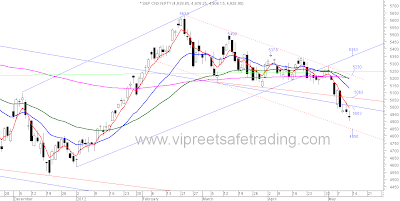 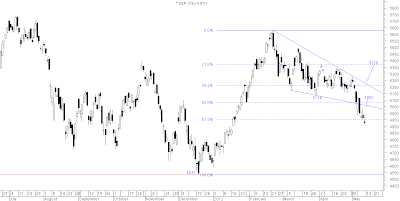 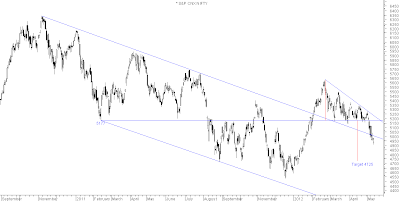 The Nifty made a doji which gapped down but managed to close the gap during the day.The 61.8% retracement has been surpassed inidcating a down trend is in place.
Three dojis in a row show the bears may be weakening.Rsi14 and stochastics have reached the oversold zone supporting a pullback.5060 will be stiff resistance.With the possibility of the Nifty testing 4725 as shown in the chart above a sell on rise would be prudent.


Half Hourly charts show a falling wedge which is a bullish pattern.Breakout on the upside will find multiple resistance at the levels marked on the charts. 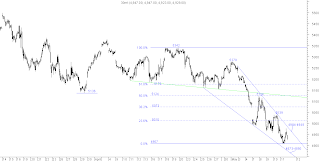 Posted by Lakshmi Ramachandran at Monday, May 14, 2012