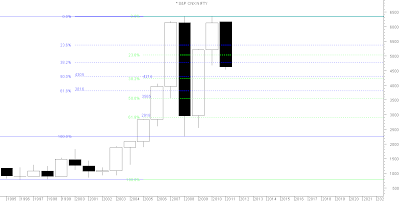 Yearly chart shows a definite pullback after a down year.Only on one occasion -- 2000 and 2001 did the fall continue.The volumes on the 2011 fall was low implying it was just a correction.4200-4300 should be a good level to start going long. 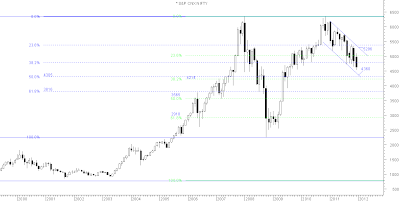 Monthly Charts are bearish, moving in a what looks like a bear flag.But being 13 months  old makes it a falling channel.Support for the month is at 4360 and resistance at 5296. 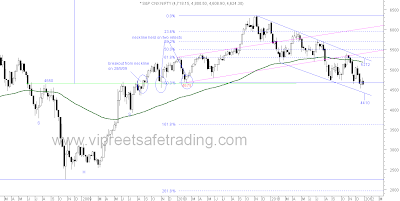 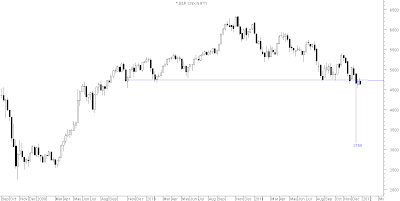 The trend is down and nifty has closed at the lowest level in 2.5 years. In Chart weekly II,  I have drawn the neckline as per line chart, that is close only chart,  and then converted it to a candlestick chart. Close only charts are more significant and shows the real picture.Thus we  clearly see two consecutive closes below the neckline. Target would be 3166. 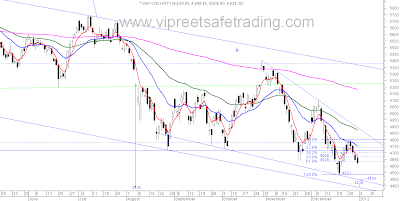 Positive divergences intact on daily charts as shown below.So beware a  pullback. However, only a cross above 4800 signals a short term reversal. 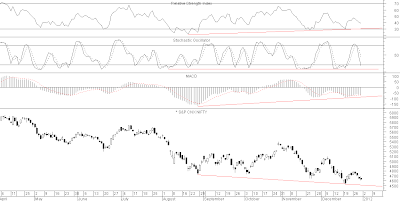 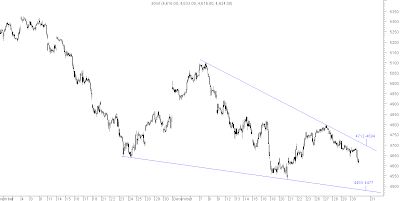 Conclusion : Trend is clearly down and weakness persists with pullbacks fizzling out sooner each time as is vivid with the formation of a falling wedge on half hourly charts.The daily, weekly and monthly charts are reaching oversold zone and started showing positive divergences.Yearly charts historically have shown a pullback after a down year.
The rising wedge is a bullish pattern but till it breaks on the upside bullishness cannot be assumed.So till this happens stay short for targets already discussed.