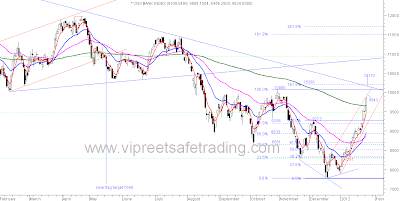 The bank nifty is exuding bullishness.Crossed the 200 dema easily and closed above it.Have redrawn the downtrendline from November 2010 highs to encompass all peaks.Resistance is now at 10080-10172-10208. But today's candle has formed an outside day pattern which could be indicating a reversal. If it occurs after a big move, which the Bank Nifty has,it is often taken as a signal that momentum is waning for that move.The larger the range and higher the volume, the more significant is the pattern.Volumes on the Bank Nifty today was very high and range too was  large.With the oscillators in overbought position one needs to be careful on longs