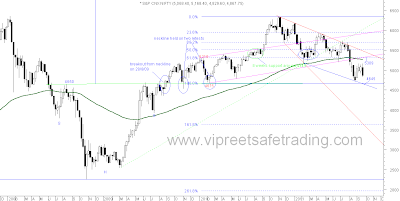 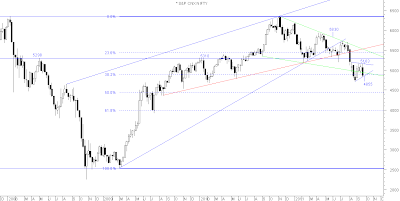 The Nifty has once again closed below the 38.2% retracement level of the rise from March 2009 lows.The pennant formation true to it's character was broken on the downside indicating more weakness to come.The fact that the fall from 5740 to 4720 was retraced only around 38.2% conveys weakness.Oscillators too have turned down after making yet another lower high.

As shown on chart one the 4645-4675 is an important level and should not be broken if bullishness is to return.If breaks then the fall towards lower targets upto 4300 and below could open up.I have redrawn the pennant to encompass today's low. If 4855 is held then another leg up to 5163 could play out. 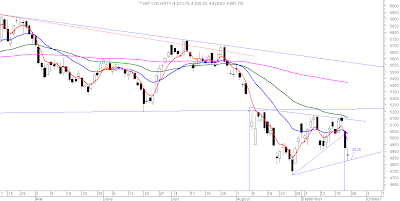 The daily charts pretty much convey the same story. The long legged doji  shows indecision as neither the bulls nor the bears could win the session.Long legged dojis convey waning momentum of the current trend but the daily oscillators are not yet oversold so this doji may not lead to a reversal. 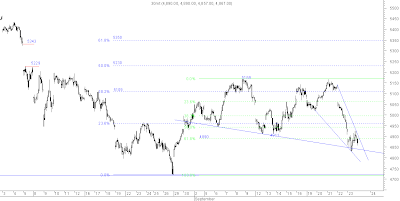 Desperately looked for some 'support' signs for the daily doji candle and found a falling wedge. Also the trendline joining bottoms with 4911 was broken intraday but recovered soon enough.The gap made on Friday was also closed.