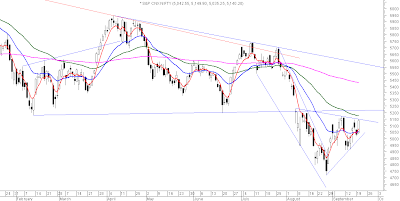 The Island reversal was nullified with the Nifty bouncing back sharply with a 108 point rise . The 5and 20 ema whipsaw depicts the sideways movement that Nifty is making within the pennant. If breaks down the pennant is confirmed . If breaks on the upside then the inverted head and shoulder shown on half hourly charts gets confirmed.

The breakout points are very close at 5147 and 5014. 50 dema resistance is at 5176.The resistance from the bearish neckline from which Nifty broke down on 5th August is at 5213.The range between 5169-4911 shown on half hourly charts needs to be broken to gain some momentum.

Daily oscillators are showing strength having moved above the 50 mark. Macd is in buy and about to move above the zero line.With today's  bullish candle the bulls may be in a favourable position. 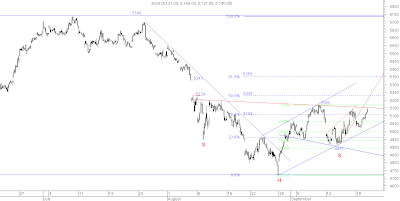