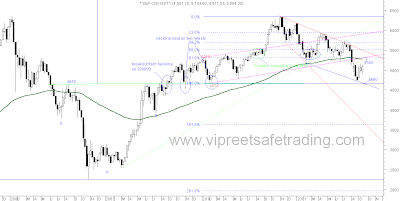 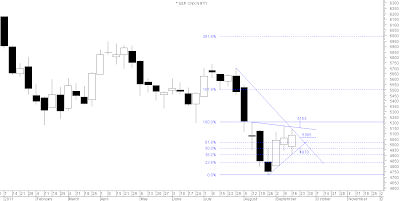 A lower high lower low candle .The pennant depicts the sideways movement nifty has been in since the gap down in the week ending 12th August. 5155 & 4970 are the levels to watch for further direction.Pennants though, are continuation patterns and breakout in the direction of the existing trend. 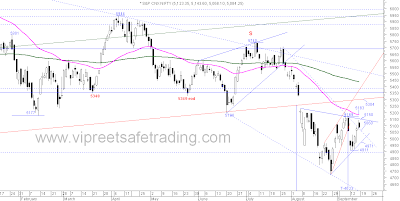 The Nifty closed above the resistance line of the falling wedge, but failed to bring in  bullishness as the highs were not sustainable forming a black candle. The resistance line of the pennant which could also be the neckline of an inverted head and shoulder is at 5150.The support line is at 4971.trading above 5060 can attempt to cross the neckline and failure to stay above 5060 will test the 4971 levels. 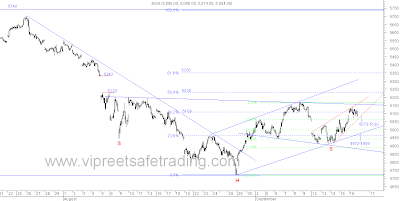 So we have an inverted head and shoulder pattern which is bullish, an upward sloping  broadening pattern  which is bearish and a rising wedge , shown in red, which is bearish too.Holding 5073-5120 for the day will lead to break of the neckline. Break may find support at 4972-4989 which is the support line of the broadening formation. 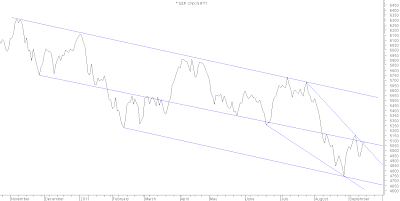 I love Line charts since they make analysis simple.The falling wedge formed since June second half has given a breakout.The trendline drawn in the middle joining a series of lows will give stiff resistance.If the breakout is maintained, and the middle trendline is scaled  then probabilities of  testing the downtrendline from November 2010 highs is high. The point of contention for the week is 5065.