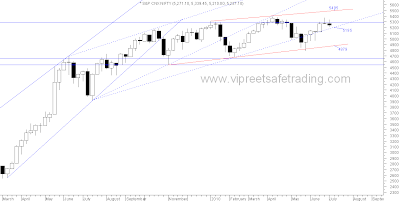 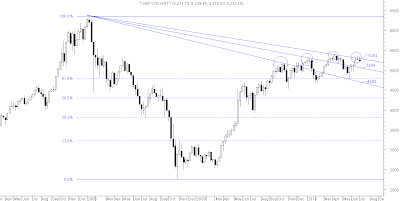 Last week Nifty  formed a shooting star which was highly bearish. Bearish confirmation is required after the Shooting Star and can take the form of a gap down or long black candlestick on heavy volume.The bearish confirmation on the Nifty did not confirm with a gap down or a long black candle nor were the volumes heavy. However forming of a lower high lower low candle shows lack of strength to move beyond the high of the shooting star.The fact that the move past 5367 to scale the previous peak at 5399 made 2 months ago has been eluding , adds to the bearish possibilities.

The stochastics is overbought, the Rsi 14 continues to make lower high and lower low since October 2009, Macd too has been in tandem with the Rsi 14 and is in a sell mode. Only a move above 5367 will nullify the bearishness.

Last week I showed Chart II where  the downtrendline from January  2010  joining highs made in the rally from March 2009, being strong resistance at first but nifty finally scaled it to make new highs in the rally. The Nifty may thus correct some more only to finally scale the trendline.The Nifty seems to be confirming this view as of now. 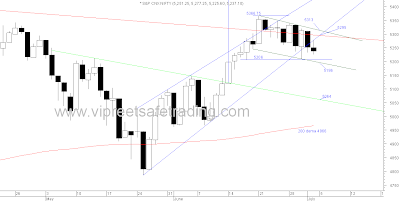 Daily Charts show a decisive close below the uptrending channel giving support to the follow up bearishness necessary for the shooting star.However, the correction from 5367 is showing a flag formation which will prove bullish if the resistance at 5313 is overcome. Bearishness continues if the support from this flag  at 5196 is broken.

Lakshmi, missing your analysis before market hours. Hope you have thought of a better way to keep off copycats

will try my best to update before trading hours