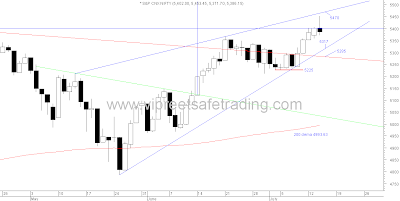 Nifty continued to make a higher high and higher low , but disappointed with profit booking, leaving a bearish long upper shadow.The breakout above 5400 was thus short lived.Breadth was negative and volumes good. The volumes on losing stocks was much higher than on gaining stocks. The Sensex managed to catch up with the Nifty and made a new high ,but like the Nifty  could not maintain the breakout .

The signal is bearish though more evidence would be required before declaring a top.The top made at 5453 was a reaction area as it was close to the 161.8% fibo level of 5463 shown in my posts since last few days. Thus it could be mere profit booking. Also the previous day's low at 5357 was not been violated. . If this fails then support of the uptrendline at 5315 should hold. Nifty could attempt to move higher till it holds these levels.