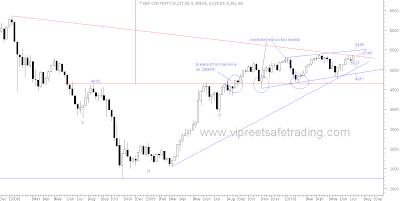 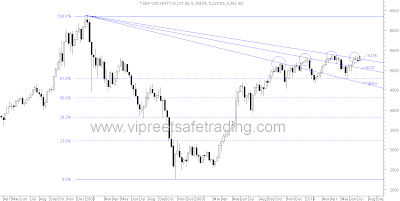 As shown in Chart II the pattern wherein, " the downtrendline from January  2010  joining highs made in the rally from March 2009 proved strong resistance at first but nifty finally scaled it to make new highs in the rally"  has been maintained with the Nifty closing above 5284 to breakout from the down trendline. Continuing to conform to the pattern the nifty may continue to trade higher for at least the next two to three weeks.

The stochastics has given a buy once again in the overbought region  and the Macd which had been giving an uptick since the last three weeks has given a buy again.The Rsi 14 is maintaining above the 50 level and moving up.

However the negative divergences are intact. Volumes too were very low. Breadth improved. 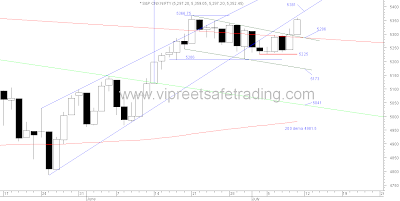 The Nifty broke out from the flag decisively but failed to breakout of the high of the range at 5367 on good volumes and positive breadth. The target for this pattern breakout is 5767.Oscillators too are showing strength by moving up before reaching oversold zone. Macd is ready to give a buy. All ema's  are bullishly aligned.
The range of 5210-5367 still needs to be broken . The Nifty seems to be on the way to achieve the feat of breaking out on the upside. If broken the Nifty will have a range break target of 5525.The inverted head and shoulders is still valid and has a target of  5513--Refer post of 15th June 2010.
Supports are at 5286-5225 and Resistance at  5367-5381-5399.
Trade long with proper hedge or with a tight stop of 5285.
Happy Trading !!
Lakshmi Ramachandran
www.vipreetsafetrading.com
Posted by Lakshmi Ramachandran at Saturday, July 10, 2010